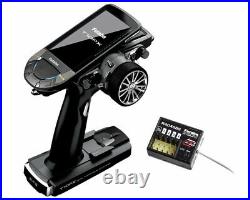 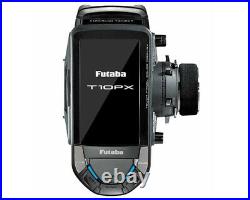 Futaba’s high-end model 7PX series for cars & boats, which is favored by many of the world’s top drivers. Taking over that DNA, a new “T10PX” was born. With the new communication F-4G, the maneuvering feeling recognized by the world champion has improved! Furthermore, telemetry communication, which was not possible with T-FHSS SR communication, can now be used. With the new function “Feeling”, it feels like it suits each driver! Supports up to 10 channels that firmly catch the hearts of scale enthusiasts. Please enjoy Futaba’s highest grade model on the circuit. Lightest in class & high balance design. High-speed response F-4G new system installed. “Feeling” – New response adjustment function. Supports up to 10 channels. Wide viewing angle full-color LCD adopted. Can be used as a game controller by adopting a USB external output terminal. New wheel unit / APA / APA angler / trigger adopted. Throttle and steering spring replacement mechanism adopted. New shape multi-position grip rubber. Paddle shift lever switch + bottom switch + 3 position switch adopted. LiFe battery FT2F1100B included. Optional Lipo battery LT2F2000B can be used. Full color touch screen. LCD T10PX has an HVGA 4.3 inch, full-color, backlit LCD touch screen. The screen is transflective which enables both indoor and outdoor visibility. F-4G system & telemetry. The 10PX is equipped with an F-4G system that enables telemetry with faster response than the T-FHSS SR system. SR Mode (Super Response). Equipped with SR mode, which has a significantly improved response compared to conventional. SR servo is required to use SR mode. 10 channels Up to 10 channels can be operated by using the S. By setting to the MINIZ system in the receiver setting menu, you can use Kyosho Mini – Z Evo dedicated receiver RA-42. The software can be updated by microSD card. Model data can also be saved in a microSD card. In addition, telemetry log data can be saved. Model memory for 40 models. Model names can use up to 15 letters, numbers, and symbols, so that logical names may be used. A model memory with different setups can be created by using the model copy function. Paddle switch + bottom switch + 3 position switch. A paddle switch near the wheel, a 3-position switch on the grip, and a bottom switch on the bottom are equipped to support multiple channels and functions. Lipo battery can be used. The optional LT2F2000B Lipo battery can be used as the transmitter power supply. The running time is extended. Brake mixing for large-scale cars. Brake mixing of the front and rear wheels of 1/5GP and other large cars can be adjusted independently. Steering mixing Smooth cornering is possible by the independent left and right steering servo setting. 4WS mixing for crawlers and other 4WS type. This function can be used with crawlers and other 4-wheel steering type vehicles. Dual ESCs mixing for crawlers ESC at the front and rear are controlled independently. Gyro mixing The sensitivity of Futaba car rate gyros can be adjusted from the T10PX. Tank mixing This function is intended for vehicles such as tanks. LED lighting and flashing control using our CPS-1 channel power switch can be matched to steering and throttle operation by switch only. This is a special function that allows setting of the parameters of our S. BUS servo whose settings are changed by using PC Link software. This is a dedicated function which allows setting of the contents of the Link software which makes possible Futaba speed controller (ESC), MC960CR, MC950CR, MC850C, MC851C, MC602C, MC402CR, etc. Variable frequency and other data changes by PC at the T10PX. Sudden trigger operation on a slippery road surface will only cause the tires to spin and the model to not accelerate smoothly. By setting the throttle speed function, operation can be performed smoothly and easily. It also suppresses battery consumption. When you sense that the steering servo is too fast, etc. The servo operating speed (direction that suppresses the maximum speed) can be adjusted. When the telemetry function is OFF to confirm that the telemetry function is not operating. This function assigns functions to dials (digital trim, grip dial, knob). The step amount and operating direction can also be adjusted. Trim positioning at each model call is unnecessary because all the dials are digital. This function assigns functions to 10 switches. The operating direction can also be set. Wheel & Trigger position can be changed. The wheel position can be offset by using an accessory APA wheel position offset adapter. The wheel angle can also be adjusted. The position of the throttle trigger can be moved forward and backward. Left handed position is supported. It is possible to convert to a narrow grip type by exchanging the rubber grip. Lock functions which prohibit setting and operation by transmitter trim, and dials are provided. The left and right installation direction of the wheel section can be reversed. Vibrator built into the grip The vibrator can be operated at racing timer lap navigation, time-up, and low battery, telemetry alarm. It sets it on each function screen. The transmitter can be used as a game controller by connecting it to a computer with a USB cable. Some games cannot be used. Dry battery holder (Installed in transmitter). Wheel offset adapter two size (APA). APA Mounting screws (Spare screws are also included). Wheel adapter 32 deg. Wheel Angle spacer 5 deg. Large diameter steering wheel. Trigger guard (Lx1 / Rx1). This item is in the category “Toys & Hobbies\Radio Control & Control Line\RC Model Vehicle Parts & Accs\Control, Radio & Electronics\Receivers & Transmitters”. The seller is “cosmopro” and is located in this country: IT. This item can be shipped worldwide.