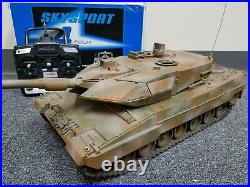 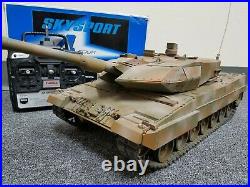 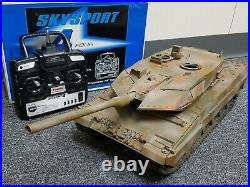 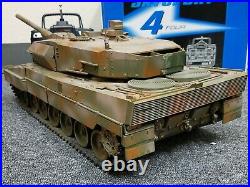 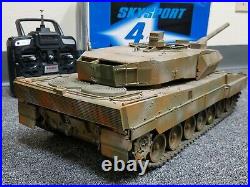 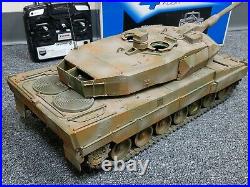 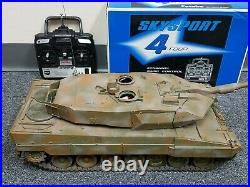 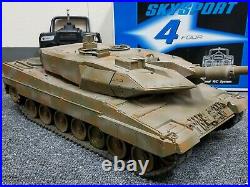 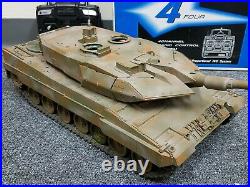 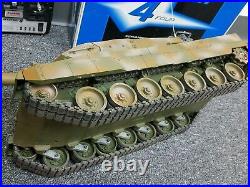 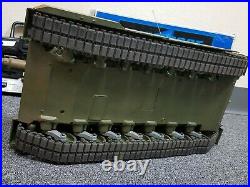 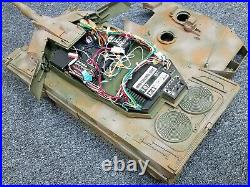 Up for sale is a Used Ready to Run Painted fully functional Radio Control Tamiya 1/16 Leopard 2A6 Main Battle Tank with some cosmetic pieces missing or broken, it come with 4-channel operation with DMD Control Unit. Futaba Skysport T4VF Radio Control. All you need is a 7.2V battery with Tamiya battery plug and battery charger for transmitter, you are ready to run. This tanks will go anywhere and climb almost anything in front of it. There are some cosmetic pieces missing or broken missing. It does not have the 2 pin that lock the upper turret and the light was broken and missing. This tank have DMD unit that give you all action sound and firing sound effect. Tank will come as it show in picture, please refer to all picture for reference, due to the nature of hobby all sales are final. Please let me know if you have any question. Here is the specification from Tamiya. Widely recognized as the best modern day Main Battle Tank (MBT), Tamiya introduces the latest German Leopard 2 tank, the Leopard 2 A6, to the 1/16 scale R/C tank series. Tamiya’s biggest R/C tank ever, it’s just like driving the real thing! About the Leopard 2 A6. Used by more than 10 European nations, Germany’s Leopard 2 tanks are a perfect balance of firepower, protection, mobility and availability. With the Leopard 2A5 regarded as the most powerful tank in the world with superior protection and fire power, the latest Leopard 2, the 2A6, features an even more powerful weapon system. The Leopard 2A5 featured replaceable wedge shaped armor on the turret, improved PERI-R 17 panoramic Commander’s sight with thermal vision, spall liner on the turret interior for protection against splinters, all-electric gun control and stabilization system for easy maintenance and reduced noise, GPS navigation system, electro-pneumatic driver’s hatch and a CCD camera mounted on the rear of tank for high-speed reversing. The Leopard 2A6 featured improved firepower including a 55 caliber 120mm smoothbore main gun utilizing kinetic energy LKE II ammunition for higher muzzle speed and lethality. The 2A6 has been employed by the German 403 tank battalion since March 2001, and is scheduled to replace all German 2A5 tanks by 2006. The use of the 2A6 continues to spread throughout Europe with the Netherlands, Spain and Greece adopting the 2A6 for their main battle tank. With continued improvements the 2A6 continues to set new standards as the world’s best MBT. The T-07 DMD unit provides the 1/16 R/C Leopard 2 A6 with more features than any other Tamiya R/C tank. The T-07 unit matches engine sound (which has been digitally recorded from a real MB873-Ka501 turbo-charged diesel engine) with tank movements, and controls various lightning combinations activated easily with transmitter. Turret rotation, gun elevation and firing sounds also add to the realism of this model. The T-07 unit and 7.2V battery are mounted in the turret for easy and quick accessibility. Synchronized light and sound effects. The R/C Leopard 2 A6 is equipped with a sound speaker unit mounted at the center of the hull. A xenon flash tube is used to make gun firing more convincing. When fired, main gun recoils and then goes back smoothly to its initial position thanks to a gearbox mounted in the turret. Of course, these actions are coupled with sound effects which have been digitally recorded from the actual tank. The R/C Leopard is powered by 2 high-torque Type 540 motors. A specially designed gearbox allows smooth power transmission at both low and high speeds. This system accurately imitates the transmission of the actual tank. One motor controls forward/backward movement and the other motor allows the tank to turn and rotate. Suspension comes equipped with torsion bars that give this model high mobility. Smooth turret and gun movement. In order to obtain smooth rotation, the turret ring has been equipped with 20 steel balls. The newly designed system for gun elevation and recoil effect features a servo for more realistic movements. While rotating turret with gun in lowered position, the gun automatically raises and goes back to its initial position to avoid the engine deck, like the actual tank. The R/C leopard 2 A6 features various workable lights such as headlights, tail lamps, brake lights, black-out lights and rotating light. Model features 7 lighting combinations, 4 for tank during combat operations and 3 during non-combat operations. Main gun and axial machinegun also flash when fired. Metal parts for accuracy. Kit includes die-cast sprockets and lathe-turned aluminum gun barrel. The double-pin tracks, which are equipped with pads made out of rubber like the actual tank, come pre-assembled. In order to obtain an even more striking feel of realism, mesh of the baskets mounted on rear of turret, and grills on the engine compartment cooling fans have been reproduced with photo-etched parts. The front-mounted gearbox contains two Type 380 motors that can operate together or individually to produce forward/reverse running and pivot turning. Metal torsion bars and suspension arms combine with the wide tracks to smoothly absorb bumps and dips in the terrain and provide high maneuverability. In addition, realistic engine sounds accompany the tank as it starts up, drives, and stops to idle. Hull-mounted main gun can be elevated, depressed, and swung to the left and right. The item “Use Tamiya RC 1/16 Leopard 2A6 Full Option with DMD Control Unit Tank Futaba RTR” is in sale since Tuesday, October 6, 2020. This item is in the category “Toys & Hobbies\Radio Control & Control Line\RC Model Vehicles & Kits\Tanks & Military Vehicles”. The seller is “odyssey728″ and is located in Arcadia, California. This item can be shipped worldwide.